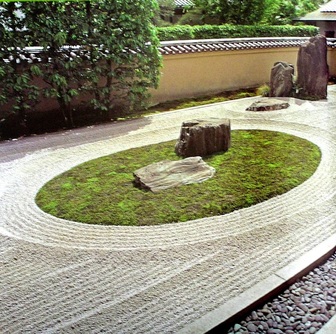 Ancient Japanese Shinto beliefs honored large stones and other natural elements such as streams, mountains and waterfalls as gateways to the gods.  This led to the design of Japanese stone gardens as places to walk through and experience the spiritual influence of nature.  With the introduction of Zen to Japan the original idea of the gardens began to alter with meditation being emphasized thereby becoming known as Zen gardens.  Water was replaced with crushed gravel and later sand which was raked to represent water.  The garden also became a place for guests to gather or meetings to take place.  Eventually it was designed as a place to be observed from outside rather than walk through which led to the miniaturized tabletop Japanese sand garden.*